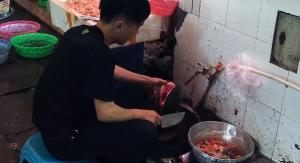 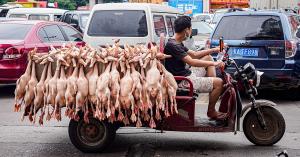 From the moment our investigators arrived at the markets, they could see live and dead animals transported in vehicles that exposed them to dirt, smog, and contamination without any oversight or accountability. 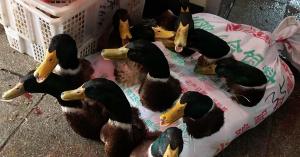 Animals at these markets, like these 12 ducks crammed into a single sack, experience high levels of stress that cause their immune systems to deteriorate. This makes them more susceptible to deadly viruses—viruses that can cause pandemics like COVID-19.

Exclusive Investigation Reveal Markets, Like Those Where Scientists Believe COVID-19 Began, Continue to Sell Wild and Domestic Animals for Consumption.

Wet markets are a direct threat to human health and safety, as well as extremely cruel towards animals. It was our obligation to show the world that these dangerous markets are still in business.”
— Sharon Núñez, President of Animal Equality

This is not the first time that Animal Equality infiltrated wet markets in Asia. In 2014 and again in early 2020, the nonprofit released shocking images of wet markets in China, Vietnam, and India, which documented extreme neglect and animal cruelty within these unsanitary places.

“The risk posed by wet and live animal markets is undeniable. Unfortunately, wet markets are still operating despite media reports and government statements claiming otherwise. As these markets are a direct threat to human health and safety, as well as extremely cruel towards animals, it was our obligation to show the world that these markets are still in business and as such, are increasing the likelihood that another virus like COVID-19 could emerge,” said Sharon Núñez, President of Animal Equality.

The investigation was filmed in China in May 2020 with the help of local activists in the cities Wuhan, Guangzhou, Dongguan, Guilin, Nanning, and Liuzhou. The footage reveals that despite the pandemic, live animal markets continue to sell animals such as turtles, frogs, ducks, geese, pigeons, and others, bringing together species that in nature would never live together. Scientific consensus finds that these markets are the perfect breeding ground for animal-borne diseases, and according to the Centers for Disease Control and Prevention, 75% of all new or emerging diseases in humans come from animals.

Animal Equality points to research that warns that the abusive and unhygienic handling and transportation of animals cause them high levels of stress, which leads to the deterioration of their immune systems, making them more susceptible to diseases—diseases that, if the jump is made to humans, increase the likelihood that another pandemic virus could emerge.

Animal Equality seeks the closure of live animal markets, which are not only cruel to animals but also pose a substantial risk to human health and safety. A worldwide petition started by Animal Equality in April calling for the end of all wet markets has gathered over 500K signatures, so far.

ABOUT ANIMAL EQUALITY
Animal Equality is an international organization working with society, governments, and companies to end cruelty to farmed animals. Animal Equality has offices in the United States, the United Kingdom, Germany, Italy, Spain, Mexico, Brazil, and India.