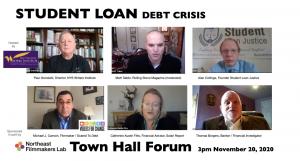 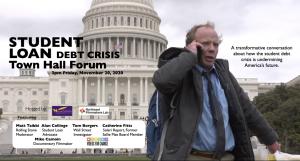 Alan Collinge of Studentloanjustice.org is the leading activist in the US calling for reform. 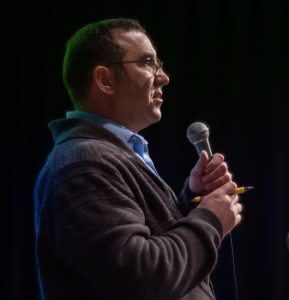 A transformative conversation about how the student debt crisis is undermining America’s future moderated by Matt Taibbi of Rolling Stone with leading experts.

The hashtag #CancelStudentLoans is trending on Twitter and approaching one million signatures petitioning the POTUS to use Executive Orders to cancel all student loans, but why? The New York State Writers Institute presents the Student Loan Debt Crisis Town Hall, a transformative conversation about how the student debt crisis is undermining America’s future. The one hour virtual discussion premieres 3pm Friday, November 20th, moderated by author Matt Taibbi of Rolling Stone and features leading experts across the U.S. The event is free and open to the public who register on www.eventbrite.com/e/student-loan-debt-crisis-town-hall-tickets-128447629317

Filmmaker Michael J. Camoin presents scenes from his upcoming documentary SCARED TO DEBT: America’s Student Loan Scam while Taibbi invites panelists such as leading activist / founder of StudentLoanJustice.Org, Alan Collinge, author of The Student Loan Scam: The Most Oppressive Debt in US History and to Fight Back, to respond. Investment advisor, Financial investigator, Thomas Borgers, a Wall Street Banker, has interviewed thousands of parent-plus borrowers, co-signors, who apparently were never offered financial advisement by the “banker,” in this case, universities and colleges. He warns university presidents this could have legal complications. Catherine Austin Fitts, former Sallie Mae board member (19991-93) wonders why students are still taking out loans given the removal of consumer protections by Congress in 1998 (Clinton) and 2005 (Bush). Camoin’s documentary will cover the demise of the Department of Education now fraught with ineptness, corruption and booking billions in profit on student loans in default. The student loan debt town hall is a virtual march on Washington hosted by author, Paul Grondahl, director of New York State Writers Institute.

Additional bios for each panelist can be found at the link above, where the premiere will drop 3pm November 20th and run for 6 weeks through January 2nd. Viewers will be able to follow-up with panelists, become an ambassador for the documentary and learn how to get engage in transforming an otherwise federal predatory lending scheme.

Support to complete the documentary through a tax-deductible donation is also shared via a charitable 501(c)3 non-profit From The Heart Productions here: http://videosforchange.wedid.it/campaigns/8295

Co-hosted by the non-profit Capital Cinema Cultural Exchange, Inc. the lab’s mission is to support emerging filmmakers to complete and present their projects in a rapidly changing media landscape by leveraging world-class industry expertise through the Northeast Filmmakers Lab.