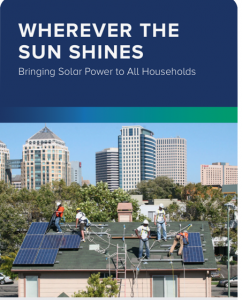 For the better part of a decade we’ve been working together to identify and put into practice the specific behaviors that motivate people to become solar owners.”
— Brian F. Keane, President of SmartPower

This represents the third time that this unique team of researchers and implementers have been awarded a SEEDS grant from the US DOE.

The SmartPower-Yale-NYU Partnership will study how solar adoption interacts with other emerging energy technologies, such as energy storage, including behavioral impacts associated with co-adoption and the value of combined systems. Under the direction of Professor Ken Gillingham of Yale University’s School of the Environment and Professor Bryan Bollinger of NYU’s Stern School of Business, the Partnership will conduct two field trials – one in Connecticut and one in Alaska. The field trial in Alaska will study the connection between energy efficiency audits and solar energy adoption. And the field trial in Connecticut will study adoption patterns of residential solar and behind-the-meter energy storage and the value they add to the grid. The team will also examine the effect of this adoption on residential energy use and whether there is any change when electric vehicles are also involved.

Professor Ken Gillingham of Yale University’s School of the Environment and Professor Bryan Bollinger of NYU’s Stern School of Business will lead the research team.

“This next phase of our research has the potential to prove the potential of solar storage and other behind the meter resources,” said Prof. Ken Gillingham. “And I am excited for our team to reunite to continue to explore the rapid evolution of solar energy in the broad energy landscape.”

Prior to today’s announcement, The Partnership recently released a groundbreaking “guidebook” on how to “Solarize” low and moderate income (LMI) communities.

Titled “Wherever The Sun Shines: Bringing Solar Power to All Households“, this guidebook is the result of years of research and on-the-ground implementation that SmartPower and the Partnerhsip have undertaken as part of the SEEDS 2 research grant from the U.S. Department of Energy Solar Energy Technologies Office.

The work for this guidebook is based on the award-winning “Solarize” campaigns that SmartPower and the Partnership perfected throughout SEEDS 1 and SEEDS 2. And indeed, the research described in this guidebook demonstrates that Solarize campaigns can and do work for LMI communities. On average, these campaigns led to a nearly 1,000% increase in the rate of solar adoptions in a municipality during the campaign and saw a continued increase in adoption even after the campaigns ended. A copy of the guidebook here: https://tinyurl.com/ybxeyfnx

“We are beyond excited to once again be a part of this exciting and expert team,” said Brian F. Keane, President of SmartPower. “For the better part of a decade we’ve been working together to identify and put into practice the specific behaviors that motivate people to become solar owners. Our past work together has been similarly research-based and at the same time has real world and market implications too.”

The Yale School of the Environment, NYU, and Duke University, in collaboration with SmartPower, the Connecticut Green Bank and others conducted a series of rigorous controlled field trials to better understand the adoption of residential solar. The Yale Center for Business and the Environment coordinated the partnership and worked with a team of students to facilitate the research, assist with the data analysis and create this guidebook. Our various guidebooks and reports can be found at https://cbey.yale.edu/programs/solar-energy-evolution-and-diffusion-studies-seeds