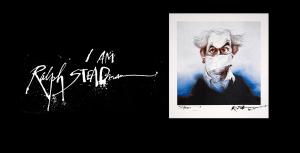 A self ‘Poortrait’ by Ralph Steadman

Pantheon Art and Ralph Steadman have released a new series of “Steadman Self-Portraits.”

LONDON, UNITED KINGDOM, November 18, 2020 /EINPresswire.com/ — Original artwork by Ralph Steadman is very rare – so it’s notable that 14 of the 24 prints in the series have been further elaborated by Ralph in his own hand.

This “Self-Portrait” is a re-imagining of his iconic self-portrait of 1981 which was featured on the cover of his book “Between the Eyes”.

Famed for making “humans look like reptiles,” this portrait lets Steadman’s humanity shine through. Here is a good man, a humorous man, who doesn’t take himself too seriously, but who from the beginning has reflected in his art the nightmares in the world around him.

His image emerges from a forbidding and groundless darkness, while his gaze and twisted mouth reflect the torment of the horrors that he continues to rail against – the destruction of the environment and in particular the loss of animal species. The deep-socketed eyes, under their alertly raised eyebrows dominate the image, reflecting his obsession to look hard and “see it as it is”.

Limited to just 24, each silk-screen print has been hand-pulled by Harwood King and then hand-signed by Ralph. Amongst the 24, 8 have been enhanced with characteristic Steadman ink flourishes and 6 have been individually overpainted by Ralph Steadman to create unique original works of his art.

The two images featured here show a base silk-screen print enhanced with Steadman ink flourishes, and one that has been overpainted with a mask to try to capture the worldwide agony of 2020. All of the art can be seen at “Steadmanselfportrait.com”