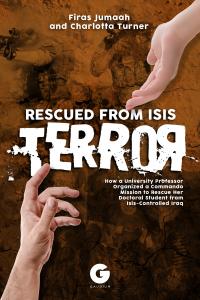 Cover of Rescued from ISIS Terror 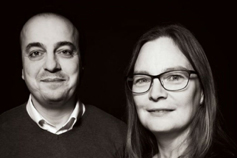 LAS VEGAS, NEVADA, US, November 18, 2020 /EINPresswire.com/ — Histria Books is pleased to announce the release of Rescued from ISIS Terror: How a University Professor Organized a Commando Mission to Rescue Her
Doctoral Student from ISIS-Controlled Iraq by Firas Jumaah and Charlotta Turner. The book is published by Gaudium Publishing, an imprint of Histria
Books dedicated to outstanding works of non-fiction in a variety of fields. In the summer of 2014, Firas Jumaah was working diligently to complete his
doctorate in chemistry at Lund University in Sweden when he suddenly received news that an ISIS advance in northern Iraq threatened the lives of his
wife and children who had returned to their native land for a family wedding. The Islamic State had unexpectedly launched an assault on a nearby village
inhabited by members of the Yazidi religious minority, to which Firas belongs, slaughtering or enslaving the entire population. Fearing for his family, Firas
immediately returned to Iraq and soon found himself reunited with them behind enemy lines.

As the situation worsened by the minute, Firas managed to send a message to his professor, Charlotta Turner, to let her know that he did not expect to return
to Sweden to complete his dissertation. Unbeknownst to Firas, Charlotta sprang into action. “What was happening was completely unacceptable,” she later explained. “I got so angry that ISIS was pushing itself into our world, exposing my doctoral student and his family to danger, and disrupting his research.”
Charlotta consulted university officials about what could be done to help. Unwilling to accept this tragic situation or to abandon her student and his family to the whims of fate, she quickly organized a commando mission that resulted in the dramatic rescue of Firas, his wife, and his two young children, ages four and six, from war-torn Iraq, bringing them safely back to Sweden.

Thanks to the heroic efforts of Charlotta and those who supported her efforts, Firas Jumaah finished his Ph.D. in 2016. He now works as a chemist in the Swedish pharmaceutical industry. In Rescued from ISIS Terror, Firas and Charlotta tell their fascinating story. In this riveting tale of family, friendship, and loyalty in the face of extreme adversity, they brilliantly interweave the story of the dramatic rescue operation with that of the tragic situation faced by the Yazidi people in Iraq.

Rescued from ISIS Terror: How a University Professor Organized a Commando Mission to Rescue Her Doctoral Student from ISIS-Controlled Iraq, 240 pp. + 12 black and white plates, ISBN 978-1-59211-061-2, is available at HistriaBooks.com and from all major book retailers. Titles published under the various imprints of Histria Books are distributed worldwide by the Casemate Group. For information on publishing with Histria Books, please visit HistriaBooks.com or contact us at info@histriabooks.com