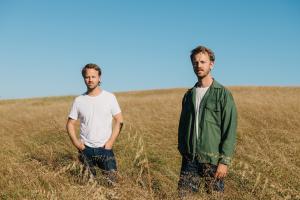 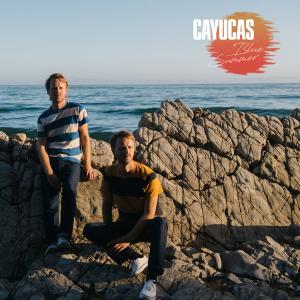 The track is an amalgam of pop, surf-rock, and acoustic-slacker, sounds – and it’s a welcome relief as the weather gets colder.

It begins with a gentle fill on a tom drum that patters like the hot raindrops of a sunshower rattling on a tin Caribbean roof. Moments later, the drumbeat is joined by a bass guitar throb that’s round, friendly, and beckoning as the sun outside a closed window. A few beats later, there’s a guitar line, drenched in just enough reverb to be redolent of an island breeze. By the time Cayucas begin to sing “Yeah Yeah Yeah,” their latest single, a scene has been set without a single word uttered: there’s a boardwalk, and a strand of beach, and a bright blue body of water nearby, and it’s summertime.

Those are the prevailing conditions straight through Blue Summer, the radiant fourth album by the Santa Monica indie band. The record is an amalgam of June styles and sounds – surf-rock, carefree Golden State pop, echoes of the Beach Boys’ experimental ‘70s records and Beck’s early acoustic-slacker anthems, the spirit and attitude of reggae and island music, and even some hints of bossa nova – and it’s a welcome relief as the weather gets colder. Zach Yudin sings of “feeling mellow yellow in the parking lot,” and that’s funny, witty, and maybe even inspiring during tense times. But, really, he didn’t have to tell us; the laid-back, dreamy groove says it all.

Superficially, Blue Summer and “Yeah Yeah Yeah” might seem to be a pivot back to the beach for Cayucas after a few album cycles spent in stranger territory. But they’ve brought along everything they learned from their tours with Ra Ra Riot and their time spent in the studio with gently experimental producers like Dennis Herring and the late and legendary Richard Swift. The result is a feel-good summertime set from a pair of musicians who are well-acquainted with the winter, and a study in simplicity from a band that understands when, and why, to get subtly complex. It’s a perfect, uninterrupted vibe – a warm Pacific wave.

Naturally, “Yeah Yeah Yeah” director Tim Toda shoots Zach Yudin and his bandmate (and twin brother) Ben by the shore. There they stand on the verge of the sand, plugged in and shades on, gulls nesting on the rooftops overhead, sailboats on the blue ocean nearby. Yet as blissful as the scene looks, the Yudins aren’t typical beachgoers – they’re plainly a couple of oddballs, and the beach town they inhabit is an offbeat one, too. Toda’s Super-8-style footage of store signs, wooden pirate busts, and American flag pinwheels lends the entire clip a vintage, mid-‘70s feel, which is perfectly appropriate for a band unafraid to look backward to go forward.