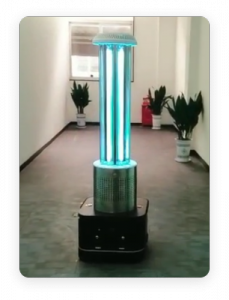 Black-I Environmental’s Covid19 fighter from China, the PureTech UV light disinfectant robot. The robot has been sterilizing indoor space in countries across the globe. 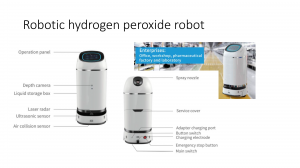 The latest to fight Covid19: Disinfectant robots from China 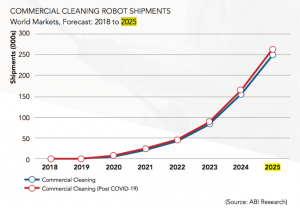 Starting from close to zero just two years ago, the growth in the use of robots to sterilize schools, offices, hospitals, distribution centers, manufacturing plants, gyms, sports venues and other indoor space has been astronomical.

Disinfectant robots have proved that they can save lives and save businesses.”
— Brian Hart, CEO

“The purpose of our effort at MassRobotics is two-fold,” according to Black-I’s CEO Brian Hart. ”We are demonstrating to executives operating hotels, stores, health care facilities and other businesses that our robots are powerful weapons in the fight against Covid19 by sterilizing facilities here. We also want to show other entrepreneurs involved with MassRobotics that hard work and tenacity combined with the tremendous resources offered by the center can lead to success.” MassRobotics provides 40,000 square feet of space to the robotics community at 12 Channel Street in the heart of Boston’s Seaport Innovation District.

Black-I PureTech robots were designed and built in China within three months of the outbreak of the coronavirus in Wuhan, according to Hart. Hart has extensive experience in biologic, chemical and radiation sensing systems working with the Department of Defense, Department of Homeland Security and many universities, including Princeton, Yale and MIT.

“Disinfectant robots have proved that they can save lives and save businesses,” Hart says. “We have designed robots and robotic systems for years at Black-I Robotics, the company behind Black-i Environmental. However, we wanted to move rapidly, so we instituted a search for a robot that could meet our strict specifications. Unsurprisingly, it turns out that the best purpose-built robots designed specifically to fight Covid were produced by independent Chinese entrepreneurs. We may improve the existing robots and manufacture locally in the future, but for now, we think it best to make these powerful robots available nationwide as fast as possible.”

Hart says that when word got out that Black-I was planning to introduce disinfectant robots to fight the coronavirus, he was contacted by a number of professional cleaning companies and facility managers, who, according to Hart, have been looking for a technology fix for the problems they face. “Cleaning offices, schools, warehouses etc. traditionally has been done by workers with rags, soap and water and maybe an automatic scrubber. Now when these workers come to their workplace, they put their health and the health of their families at risk of Covid19, and at low pay. Robots are the obvious answer to the dilemma — robots never get sick, never get tired and are able to work basically 24×7. And they pay for themselves in a matter of months, often in weeks.” Black-I Environmental, according to Hart, received its first order two months before the robots even arrived in the U. S.

Black-I Robotics, the company behind Black-I Environmental, has been in business since 2007. Most of its work has been for the government along with universities, and recently began addressing the commercial marketplace.