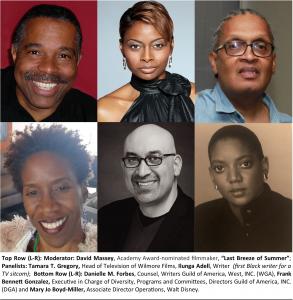 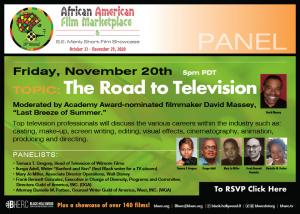 Panel will provide valuable information aimed at students, first time writers, director, producers, and other wishing to pursue a career in television and film.

There are many roads to a career in TV. Some thru film school, some not. On all of those paths, you will find that the elements of passion, determination and patience are fundamental to success.”
— Sandra J. Evers-Manly, President and Founder, BHERC

LOS ANGELES, CALIFORNIA, US, November 19, 2020 /EINPresswire.com/ — (Hollywood, CA) – The Black Hollywood Education and Resource Center (BHERC) announced today a vital panel essential in providing essential information those seeking to begin a career in television and film. “The Road to Television” panel for Friday, November 20, 5:PM PDT on www.BHERC.TV is hosted by BHERC President and Founder and Academy member, Sandra J. Evers-Manly. The virtual event assembles professionals from television who will offer insight into the steps and variety of paths to a career in the industry. This panel is the 6th in a series of industry panels offered at the 26th Annual African American Film Marketplace & S.E. Manly Short Film Showcase (AAFM SEMSFS) airing online at www.BHERC.TV now through Sunday, November 29, 2020 which offers more than 140 curated films with stories of all genres told by diverse filmmakers from 18 countries and 20 US states of all ages, the youngest being nine years old.

Pursuing a career in entertainment can be at best daunting. Since part of the mission of BHERC is to support youth and emerging filmmakers, a panel of this type was vital to include in the 2020 festival providing tangible, accessible knowledge for attendees. The panel will discuss the various careers within the industry such as: casting, make-up, screen writing, editing, visual effects, cinematography, animation, producing and directing. They will discuss how to go about assessing your skills and deciding which category to pursue. The all important question, “Should I go to film school?” How can I get experience. Once you get the experience, how do you get the jobs. Where do you look for the jobs, how do you build your network. “There are many paths to a successful career. Some have been thru film school many have not,” stated Sandra Evers-Manly, President and Founder, BHERC. “In all of the paths we will explore we will find that the elements of passion, determination and patience were fundamental to those successes.”

About the 26th AAFM Festival
The Festival includes 140 films,10 panels, special events and debuts as a virtual experience this year due to COVID – 19 on the BHERC streaming service www.BHERC.TV October 23 through November 29, 2020. Register Today at www.BHERC.TV for panels and Festival passes. $75.00 for a full Festival Pass, $25.00 for a Day Pass and $10.00 for a block of 5 films. All panels and special events are Free.

About BHERC TV
In February 2020 BHERC launched BHERC TV a leading world-wide provider of narrative and documentary short films about the African American experience, as well as content from across the diaspora and diverse populations. Offering an affordable streaming entertainment service with paid memberships in over seven countries, BHERC TV members enjoy a wide variety of genres and languages and may watch as much as they want, anytime, anywhere, on any internet-connected screen. Film lovers can play, pause and resume watching without commercials. Find out more on BHERC.TV