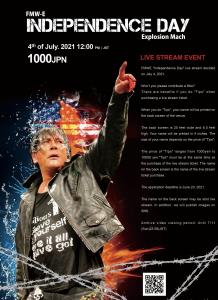 Atsushi Onita makes the announcement of his comeback explosion match on July 4th, 2021. Live broadcast of the game will be telecasted at 12.00 PM Japan Time.

YOKOHAMA, JAPAN, June 11, 2021 /EINPresswire.com/ — Frontier Martial-Arts Wrestling has experienced many surprises in its long span. The promotion specializes in hardcore wrestling involving weapons such as barbed wire and fire.

The title of the match is decided to be “Death match of Hell”. The followings will take place there:

In the year 2021, Onita made the announcement that he would be beginning the Frontier Martial-Arts Wrestling-Explosion. This is the promotion that was under the FMW name. This specialized in the exploding death matches. This is a match type where Onita became exceptionally well known. Onita stated that he had the idea for this promotion, having seen the All Elite Wrestling’s 2021 Revolution PPV. There the event had an exploding barbed wire death match. Having seen that, he understood that there was a market still for these kinds of matches in the international arena of the pro-wrestling world. So he formed the promotion taking help of the online media streaming.

About Atsushi Onita:
Atsushi Onita is a Japanese professional wrestler best known as the founder and one of the top stars of FMW. He is credited with importing to Japan, as well as innovating, the death match style of professional wrestling (which was largely popular and rooted in Puerto Rico).
For more information, Please visit https://fmw-e.zaiko.io/_item/339736