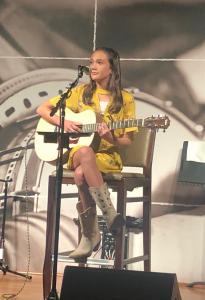 GivingTuesday is a global generosity movement unleashing the power of people and organizations to transform their communities and the world. GivingTuesday was created in 2012 as a simple idea: a day that encourages people to do good. Over the past seven years, it has grown into a global movement that inspires hundreds of millions of people to give, collaborate, and celebrate generosity

New to the Boise area, Alyssa (or Aly) recently became aware of the Discovery Center and was immediately fascinated with what the facility had to offer.

She states: “I’m a naturally curious person. The Discovery Center stokes my inquisitive nature! I love what the place has to offer and I look forward to performing there.”

The Discovery Center is a great science museum for all ages to be inspired by S.T.E.M. Typically hands-on, they now provide a safe, hands-off experience through King Tut: Treasures of the Tomb for visitors to continue to explore. Any donations made during this performance will benefit the Discovery Center’s S.T.E.M programs and ensure that curiosity never closes through these tough times.

Aly grew up in Torrance, California before moving to Star, Idaho with her family. She enjoyed living near the beach, skateboarding, playing soccer, and hanging out with her friends. But as a singer-songwriter who wrote her first song in fifth grade at the age of ten, the depth of her lyrics tells another story. Diagnosed at an early age with ADHD and anxiety, she discovered that songwriting is a cathartic way for her to address these issues. Unlike most kids, and even adults, Alyssa Grace, who also plays acoustic guitar, is open about her struggles, addressing them head-on in some of her songs.

Her musical influences include Taylor Swift, Selena Gomez, Lady Gaga, and Billie Eilish, but also Paul McCartney, as she professes to be a big Beatles fan. She says her musical tastes typically gravitate toward country and soft rock, but listening to her sing and play, a strong pop sensibility shines through. She recently recorded a soon-to-be-released five-song EP in Nashville with producer Shannon McArthur (Dashboard Confessional), where she also got a chance to perform her original material live at several venues.

You can listen to her music on her web site: https://alyssagrace.com